The Human Ear and Sound

The Human Ear and Sound

The human ear is the organ that enables man to hear, transmitting the sound energy to the brain, where it is perceived and interpreted.  Prolonged or excessive noise can have a deleterious effect on the ear.  Because of this, it is important to understand its basic structure and function and the best ways to protect and preserve it. 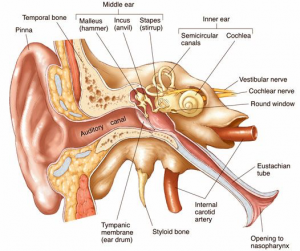 The action of the ear involves three stages.

First Stage.  Modification of the acoustic wave by the outer ear.  The outer ear is made up of the pinna and ear canal leading to the tympanic membrane.

Second Stage.  Conversion of the modified acoustic wave into vibration of the eardrum that is transmitted through the middle ear to the inner ear.

Third Stage.  Mechanical movement of the basilar membrane is translated into nerve impulses in the inner ear.

Anatomy of the Ear

When sound waves reach the human ear, they travel from the outer ear into the ear canal until they reach the eardrum.  The outer ear consists of the pinna and the external auditory canal.  The pinna is the external “ear” on a human.  The pinna and the ear canal modify the acoustic wave so that the spectrum of the sound impinging on the eardrum is not quite the same that originally reached the pinna.  Essentially, the pinna acts as a “sound collector.”  Due to the exact dimensions of the convolutions of the pinna, certain sound frequencies are amplified or attenuated.  This various in distinct ways for each individual.  As the acoustic wave travels through the auditory canal, the shape and dimension further modifies it.  This results in an amplification of about 3 kHz.  The net effect of the total modification is an amplification of 10-15 decibels for environmental sounds in the 2-4 kHz range.  This is also the range of sound spectra most audible to humans across all frequencies.

The eardrum is a cone-shaped membrane that separates the external ear from the middle ear and inner ear.  It is also known as the tympanic membrane.  When sound reaches the eardrum, it vibrates in response to the pressure fluctuations of the acoustic wave.  The middle ear contains three small bones – the hammer, anvil, and stirrup.  These bones transmit the vibration to the oval window at the entrance of the inner ear.  This converts and amplifies the vibration in the air to vibration in fluid in the cochlea.  Cells with very fine hairs line the fluid-filled cochlea.  These microscopic hairs move with the vibrations and convert the sound waves into nerve impulses that are then interpreted by the brain, resulting in the sound we hear.