Air Compressors installed in a corner of a light Industrial Facility with impact on assembly workers.

Two air compressors installed at a light industrial facility near an assembly area used to run air powered tools in the manufacturer’s process. The compressors were mounted in the corner of the warehouse near two adjacent concrete walls. Management received numerous worker complaints about the noise emanating from the compressors and retained eNoise Control to provide noise mitigation recommendations. It was determined that, to meet the customers goal, the overall noise levels should be decreased by 10 to 13 dBA at 3 feet from the compressors.

The client elected to implement recommendations incrementally. After the implementation of recommendations b and c the noise complaints ceased. Sound level validations were made. eNoise Control found that a 13 dBA reduction had been attained. 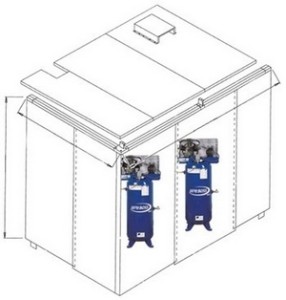 The attenuation design, sound level measurements, and the effectiveness of the mitigation will be discussed.

The manufacturer’s first concern was to lower the overall noise of the compressors and provide a safe working environment for their employees. The manufacturers other concerns were; (1.) ensuring the noise mitigation items would not impede the proper functioning of the equipment, (2.) ease of accessibility to the equipment for maintenance and repair, (3.) that the noise mitigation solution be movable and re-usable, if at a future date, they move the equipment, (4) overall cost of noise control solution. The design criterion was to decrease the noise levels by 10 dBA at 3 feet.

eNoise Control viewed the air compressors and their layout in relation to the adjacent walls, ceiling structure and the assembly area. The air compressors cycled on and off due to the variable demands of the air tools in the assembly area. When work was idle each compressor would run for a few seconds independently to recharge its tank. This would occur at irregular intervals. When production was at full speed, both compressors would run simultaneously to keep up with the air demands. eNoise Control conducted sound level measurements at both of the described conditions. Measurements were made with a Casella 1/3 octave integrated spectrum analyzer, with an ANSI Type 1 precision 1/2″ microphone and preamplifier. Measurement results were analyzed and compared to the criteria. eNoise Control determined the amount of noise attenuation required to meet criteria, and developed recommendations to provide the prescribed amount of mitigation to the air compressors. eNoise Control returned to the site to conduct observations and make validation measurements.

Two equipment elements; the compressor and the motor, generate the noise produced by the air compressor. eNoise Control was unable to measure them separately.Sound measurements were taken both near-field (within 5′ of the compressors) and far-field (30′ away at the assembly area). eNoise Control compared the compressor noise “finger print” near-field using a 1/3 octave band sound level meter and compared this signature to the far-field readings in the assembly area. We determined that the major noise source was being generated from the motor and radiated noise from the compressor tank. The objectionable compressor noise was determined to be mid-frequency noise at 400-500 Hz range. We presented our findings to our customer.

eNoise Control recommended mitigation efforts at or near the source in order to maximize the attenuation efforts. The primary intent of the recommendations was to decrease the decibel levels without limiting access to the equipment. Recommendations included the following in order of priority:

The manufacturer decided to implement the first two recommendations; to enclose the Compressors with a sound curtain wall on two sides and install a roof over the walls. Validation measurements indicated 13 dBA of attenuation was achieved at 3 ft. outside of the enclosure and a 14 dBA reduction at the location of the nearby assembly workers. Management opted not to build a dedicated room for the compressors because of its permanence if they decided to relocate the compressors at a later date. Also, management did not elect to move the assembly workers because of space limitations and disruption of material flow within the facility. No absorption was applied to the interior walls of the enclosure. The noise complaints from the employees ceased, and management had achieved its noise reduction goals.