The decibel (abbreviated dB) is an expression of the loudness or intensity of sound.  The unit of measure was derived from the methods used to quantify signal loss in telegraph and telephone circuits.  In 1928, Bell Telephone Laboratories coined the new unit of measurement, calling it the bel, in honor of telecommunications pioneer Alexander Graham Bell.  Today, the decibel is the most convenient way to convey the intensity of a sound level in the environment.  In more detailed terms, the decibel is a logarithmic way of expressing a ratio between sound pressure or intensity, though it may measure other factors such as power or voltage.

Decibel measurements are obtained by using an instrument called the Sound Level Meter.  There are various types of Sound Level Meters available, some with more precision and versatility.  However, all meters consist of four basic components: microphone, input amplifier, output amplifier, and a read out device.  The microphone converts fluctuating air pressure produced by a sound source into a fluctuating electrical charge.  That electrical charge is then converted by the input amplifier into a voltage that, once processed by the electrical circuitry, is converted into a sound pressure level (SPL).  The output amplifier then converts the weak sound signal to a level adequate to display on the read out panel.  Finally, the read out panel displays the average sound pressure levels for the environment being analyzed.  Filters can be used by the meters to measure specific bands of sound wave pressure by honing in on specific frequencies within a larger soundscape. 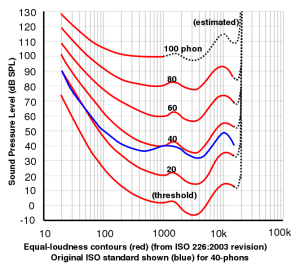 Not all sound pressures are equally loud.  Despite all the complexities that go into formulating and measuring the sound pressure level, it still lacks a direct correlation with how the human ear actually perceives the loudness of sound.  The SPL measurements gathered from a sound level meter refer to the physical phenomenon of sound, however, this number does not correlate simply to the sensation of loudness human ears interpret.  This is due to the ear’s abilities to hear sound differently depending on the frequency, a phenomenon referred to as unequal sensitivity.  Unequal sensitivity can be represented in the charting of equal loudness curves.  Each contour gives the sound level necessary to produce the same loudness at different frequencies.  The resulting numbers assigned to each curve is a unit known as the phon.  There is an important distinction to note between the phon and the dB:

While efforts have been made to develop a sound meter that will simulate the equal loudness contours, the complexity of manufacturing such a device would not be economically viable. 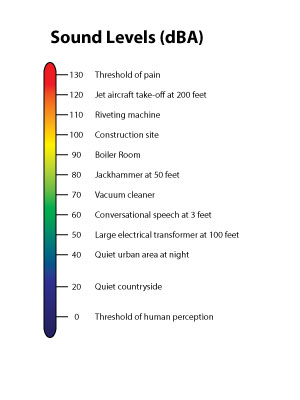 To account for sensitivity range of the ear, sound meters contain a filter with a frequency response similar to that of the human ear.  These are known as weighting filters.  When a weighting filter is turned on (using the A-scale), the SPL read out is given in units of dBA.  While there are other weighting scales (e.g., dB(B) or dB(C)), dBA is easy to measure and therefore the most widely used.
Overexposure to noise over time can create hearing loss.  It is generally recognized that continued exposure to any sound measured at 85 dBA can be harmful to the human ear.  According to the National Institute for Occupational Safety and Health (OSHA), the maximum exposure time at 85 dBA is eight hours.  In general, the louder the noise, the less time is required to cause damage to one’s hearing.  Noise levels above 140 dBA can cause damage after just one exposure.  Pictured is a decibel chart displaying a range of common sounds and their relative dB(A) measurements.